Though it has been prized by Italian alpha males from Augustus to Mussolini, the Mediterranean city of Bari always basked in relative obscurity. But now Puglia’s warm and rambunctious capital is coming into its own as a serious travel destination, comfortably removed from the tourist trifecta of Venice, Florence and Rome. Last month, this city welcomed its first five-star hotel, the 115-room GRANDE ALBERGO DELLE NAZIONI…formerly the Boscolo Bari (doubles from about $250 per night). And if you’ve ever wanted to take a luxury cruise that doesn’t go anywhere, your ship has come in.

There are two reasons for this. First: Bari has the longest uninterrupted seaside promenade in Italy, and this hotel sits smack in the middle of it. Second: its rounded facade has the feel and flair of a 1930s yacht. You could almost mistake the original 1932 structure that houses the hotel for one big, white Bauhaus curve. People used to call that building “the Transatlantic,” even though it looks out quite resolutely across the Adriatic. Its genesis was actually in Fascism: to Mussolini’s way of thinking, Bari, Taranto and Naples were going to be the starting engines of the new economy after the Second World War. He wanted those approaching Bari by sea to be impressed by what they saw, and what was for a long while the Grande Albergo Nations was the showpiece, its mythic status reconfirmed in 1973 with the filming of Alberto Sordi’s movie “Stardust” at the hotel.

All this history completely recedes from consciousness once you walk inside and observe water gushing down from a giant blue striped lampshade suspended over the reception desk. You always kiss the past goodbye when you’re in Italo Rota country. Rota’s design studio is responsible for the anticorporate fantasia that is the Boscolo Milan, and his mantra, as he explains in a press release, is “intense complexity aimed at creating an emotion in the visitor.” 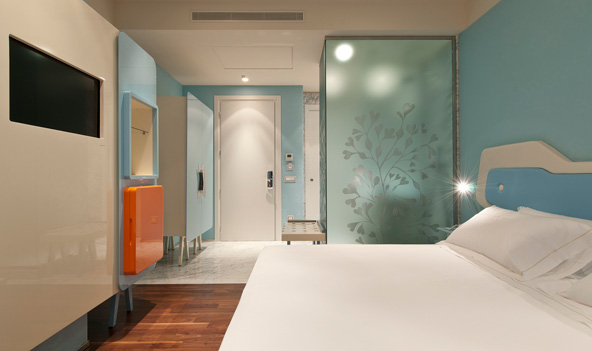 Typically, a room with a view of the Mediterranean at its bluest always presents a guest with a something of a quandary: Does anything else matter? Rota would answer in the affirmative, yet his design also manages to amplify the enchantment of this location. Inside my room there was a retro flair and playfulness to the cushy blue and white headboards and plush periwinkle damask-covered walls. A flat-screen TV was embedded in a tall, gleaming white fiberglass console, next to which the artfully installed minibar gleams in tangerine (inside is a gourmet selection of nuts in nifty glass jars for the peckish). For those who, like me, are obsessed with hotel luggage racks, the custom-designed ones at the Boscolo Bari do not disappoint: a shiny thick white platform inlaid with iridescent silver polka dots is mounted on top of four pairs of powder blue legs. A highlight of the bathroom, other than the famously tubular Boscolo bathroom amenities, was the shower, which is in the form of a spacious glass cube positioned between bed and bathroom sink.

The hotel’s public spaces include a rooftop restaurant-bar done up in white and shades of blue, and a very white pool area, also on the roof, with a ravishing view of Bari’s ample slice of the Mediterranean. A spa is set to open soon. Overall and in each detail this conjunction of high style and deference to the supremacy of the sea makes it tough to pry yourself away a top-flight perch like this. But right outside the hotel, Bari beckons with its boisterous cafes, thin-crust pizzas, and labyrinthine ancient core, where old ladies sit outside cutting pasta into the ear-shaped orecchiette, and symbols of the rather mysterious St. Nicholas, patron saint of the city, pop up where you least expect them.

Editor’s note: This column originally appeared by the same author in The New York Times